"I find inspiration in odd places. Often just finding an interesting object will push me into a whole new direction."

Rick Melby's influences span most major design movements of the last century—Bauhaus, Memphis, Art Deco, Low Brow. An avid collector of twentieth-century memorabilia, he often recycles the objects of his various obsessions into pieces that articulate a hybrid viewpoint—unequal parts surrealism, pop culture, science fiction, and fine craft. The result is a type of "post-millenium folk art for the culturally saturated."

Melby started his odyssey in glass in 1976, when he was introduced to stained glass. After ten years of working in several studios and executing many commissions in leaded glass, he branched out to explore lighting. In 1985, he took his first glassblowing lessons and quickly incorporated that technique into his lighting designs. This led him to acquire a kiln in which to fuse and slump glass, which opened up another world of possibilities for his artwork. Today, he creates his unique work in his home studio in Peoria, Illinois. 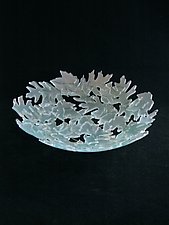 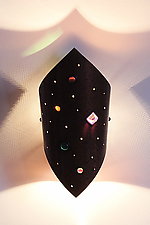 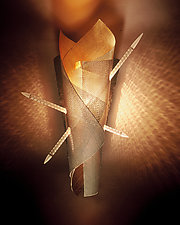